More Than A Few Reasons To Lop Off A Limb There’s nothing like making the best of a bad situation. So when that in-growing nail turns gangrenous or a tank just happens to get familiar with the contours of your leg, don’t fear as there are many ways to maintain street cred, even if you do have to have someone else cutting up your food for the rest of your life.

Spider-sense is tingling, or is it a phantom limb? Is your six-year-old missing an arm? Check. Does he or she have a curious worship of both superheroes and angling? Check. Well, this may just be the prosthetic for you. It may not have you climbing the sides of buildings or swinging among the skyscrapers of Manhattan. But at least you can pitch a fishing line and catch some carp simply using what would otherwise be a lacklustre appendage. I feel like there’s some kind of trawling-based superhero just waiting to be created based on this handy contraption.

Give me your clothes, your boots, your motorcycle and your shiny metal leg 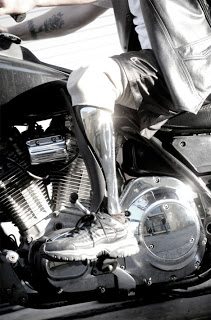 As misleading as this photo may be, I can assure you it is not a still from Terminator 2: Judgement Day. Rather, this legless motorcyclist has acquired a prosthetic that is designed to turn him into a doppelganger of the film’s cold, evil antagonist the T-1000. Not only will this give you a chilling, evil appearance, you may just end up reflecting the sun into the eyes of another unfortunate motorist off its shiny surface, causing a devastating ten car pile-up. If you’ve got a chip on your shoulder and really want to make yourself look like a bitter amputee who wants to get legions of other unfortunate motorists to join your disability club then, by all means, get a hold of this shiny shin.

This isn’t Apache on the real thing Are you in a tribe or do you see yourself as a totemic kind of person? You’re probably not, but that hasn’t stopped endless creatively challenged Brits getting ornate designs similar to the one above permanently injected into their skin, so why should it stop you getting it styled on your new limb? At least when you realise it’s neither cool nor pleasing to the eye, you can just get a new prosthetic. I don’t know if it’s just the fact this amputee is playing football, but it looks like he’s wearing a full lower leg shin pad, equipped with wiffle ball holes for added flair. You’d think the fact there is just a pillar of metal behind the plastic would be enough to keep this would be Alan Shearer confident of his health and safety, but footballers being the appearance-obsessed sportsmen they are, there’s no surprise he’s putting fashion over function. If you’ve always admired the glamour of antique mannequin chic, then this prosthetic leg may be the one for you, with its ornate design and built-in three-inch heel. I can’t help but feel, however, that the weight of the wood on your poor stump of a thigh would just be too much to bear. There’s nothing like suffering for your art, eh? Although I’d like to think that although it appears to be solid oak, it’s actually just the aesthetics and it’s as light as a feather. Just for your sake.

Just don’t do it What more can the global sports brand Nike do now that it even has its own delicately designed prosthetic limb? I think Zimmer frames proudly wielding the Nike swoosh are a long way off, but I’m sure bosses of the firm have their eyes on those vertical assistance peripherals for the elderly market. Branded with the corporate juggernaut’s Air Jordan line, the prosthetic is designed for use in sports. Yet, I’m sure there’s more than a few amputees out there who want to look like a time-travelling athlete who has come from a future dystopia where rampant obesity has meant that competitive spectator sports have been taken over by humanoids, as real people can’t last ten minutes before inducing cardiac arrest. That would be fine but, by that point, everyone has given up laughing at fat people running around for centuries.